I tried this recipe out that isn't a true Carbonara (no raw egg), and it was fantastic! Thumbs up from the kids and the hubs. Score! 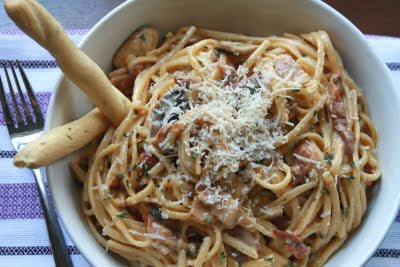 Cook and Drain linguine as directed on package. While linguine is cooking, cook bacon in a 3 quart saucepan over low heat 8-10 minutes, stirring frequently, until crisp*. Remove bacon with slotted spoon; drain. Drain fat from saucepan, reserving 1 TB in saucepan. Cook onion and garlic in bacon fat over medium heat about 3 minutes, stirring frequently, until onion is tender. Stir in linguine, chicken, cheese, and whipping cream. Cook, stirring occasionally, until heated through. Toss with bacon and garnish with parsley and Parmesan cheese. Makes 4 servings.

(* I actually used precooked bacon and fried the onion and garlic in 1 TB of olive oil instead of bacon grease. The dish was still plenty rich.) Preheat oven to 375 degrees (unless you prefer to grill). Combine oil, liquid smoke, and salt in a bowl and let chicken breasts marinade it in for 30 minutes. Combine BBQ sauce, apple juice and bacon then separate into two bowls. Place chicken inside a baking dish and discard marinade. Bake (or grill)uncovered for 10 minutes. Brush one of the bowls of sauce over chicken and cook for an additional 15 minutes. Serve with remaining sauce for dipping.

Labels: main dish
Newer Posts Older Posts Home
Subscribe to: Posts (Atom)
If you would like to add a recipe... Log-in: Elise's email address Password: is our family (maiden) name

The people putting the yummy things on here! 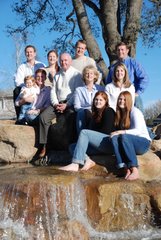 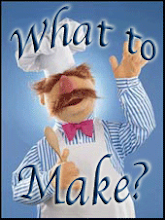